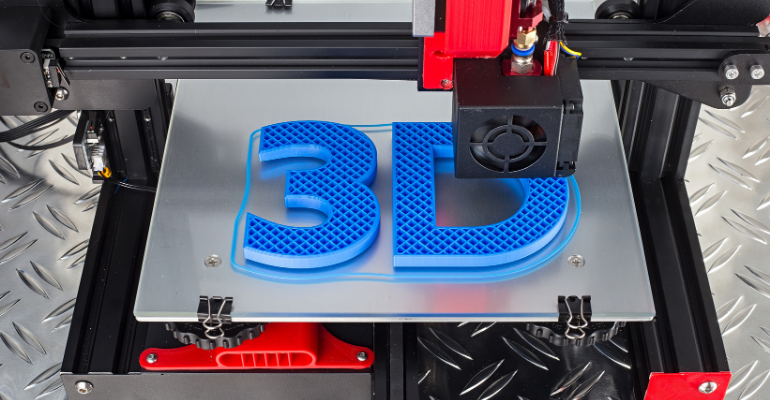 The economics of 3D printing is improving, but does the math make sense for your medical device project?

During a recent MD+DI webinar, “The Convergence of Miniaturization, Medtech, and Additive Manufacturing,” John Kawola, CEO of Boston Micro Fabrication (BMF), gave attendees a break down of the current cost-per-part threshold of 3D printing for standard parts and for small, high-precision parts.

In recent years 3D printing has transitioned from being a specialized prototyping tool used primarily by large companies to a much more standardized tool for engineers and, in an increasing number of cases, a viable manufacturing alternative, Kawola said. The machines have become more capable and easier to use, software is continuously improving, materials are being developed to more accurately mimic production parts, and the overall 3D-printing industry is trending upward, he said.

“While it’s beginning to get real traction for end-part production, and for prototyping, in a lot of ways that’s still the killer app for 3D printing. The ability to design your part and then if you have a 3D printer in your office or your facility or your school or your lab, to get something that you can hold in your hand within hours,” Kawola said. “That capability didn’t exist 20 years ago, but now it’s become much more standard.”

The use of 3D printing on the manufacturing end is becoming more common now, he said, whereas a decade ago that wasn’t really possible because the quality of the 3D-printed parts and 3D-printing materials were good enough for prototypes but not for end-use production, and 3D printing was not an economical solution for manufacturing applications.

“For any manufacturing application there are two check boxes,” Kawola said. “One is, does it meet the technical requirement? The second check box is, does the math work?”

As the technology and economics improve, however, 3D printing has become more practical for end-use production applications, including some medical devices. Dental aligners, hearing aids, and orthotics are a few examples of medical devices that can be effectively 3D printed today, he said.

The increasing popularity of miniaturization in medtech has presented engineers with some interesting challenges when it comes to making device components and features of those components small enough. While demand is large for high-precision parts, there are limited economical solutions Kawola said, because high precision molding is expensive and slow, while 3D-printing technologies have historically lacked resolution and precision.

When considering switching to 3D printing instead of conventional manufacturing techniques such as injection molding, everyone does the math.

“In most cases, 3D-printing materials, at least today, are much higher than most industrial materials costs,” Kawola said. “For standard parts, the crossover volume, or the volume where the costs are the same, is typically low.”

This means that for low volumes it makes sense to choose 3D printing over conventional manufacturing techniques. Invisalign, for example, has very low volume production jobs because every dental aligner they make is different. So for Invisalign, 3D printing is an obvious choice. For larger production volumes, however, it becomes more economical to build the mold and manufacture conventionally. For standard parts, this crossover volume is typically in the low thousands, as shown in the graph below. 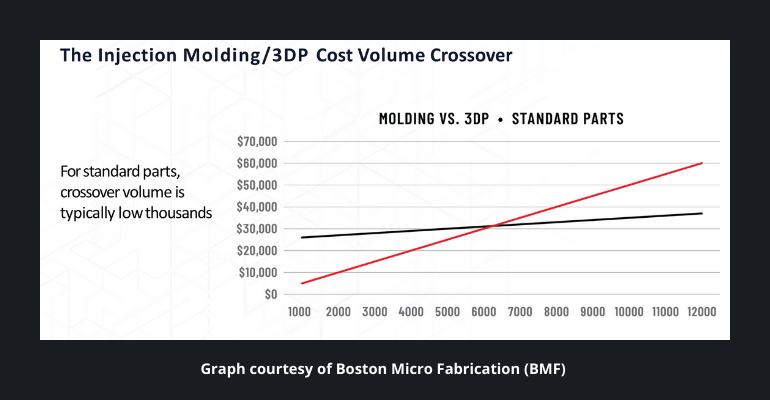 “So if you have low thousands of parts you have to make, 3D printing can get pretty interesting,” he said. “Once you get into tens of thousands, or hundreds of thousands for standard parts, molding usually is the better way to go. However, when you get small, high precision parts, the math changes.”

For small, high precision parts, the crossover volume is a lot higher because of the very high molding cost combined with the lower cost contribution from material. 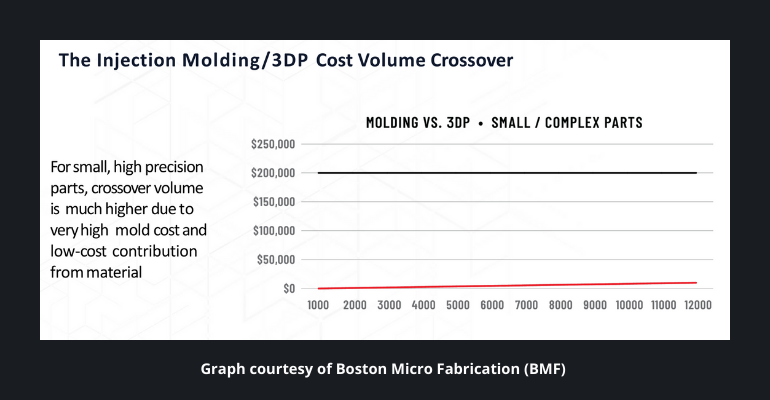 BMF has commercialized a 3D-printing methodology called Projection Micro Stereolithography, which the company calls PµSL. The technique is based on the principles of sterolithography and it allows for rapid photopolymerization of an entire layer of resin with a flash of UV light at micro-scale resolution, which enables BMF to achieve ultra-high accuracy precision and resolution that cannot be attained with other technologies, according to Kawola.

To hear more about PµSL and the differences between BMF’s approach and other approaches, register to listen to the on-demand version of the webinar for free by clicking here.